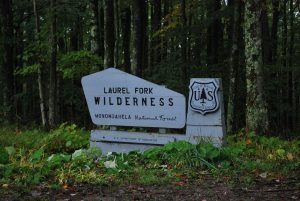 In the year 1983 6,048 Acres known as Laurel Fork North Wilderness was selected by the Congress of the United States to become part of the lands protected under the Wilderness legislation. Once it received that protection the land was then given to the Forest Service of West Virginia to manage.

This Land is sometimes thought to be two areas but is separated by only a very marginal River and is therefore managed as 1 territory. In its mountainous areas, it reaches a height of over 3,700 ft. This area is a genuine Forest and is saturated by a number of kinds of trees such as black cherry, maple, yellow poplar, Birch, and many others. There are only a few open meadows and in this wild land, there are bobcats, wild turkey, white-tailed deer, beavers, and even some black bears.

For the bird lovers there are well over 200 different species in the area and for those who enjoy fishing, there are brown trout. Because of the forest and heavy brush, many areas are difficult to cast while fishing but the trout are fairly abundant. As part of protecting the land, there is a law that says ‘leave no trace’. This means that this land is designed for the wildlife and not for people, so when someone comes they should leave no trace of their ever having been there.

This means that a person should not take anything that they find and anything that they bring including their waste, should be disposed of properly. While it is unlikely that you would run into others because of the nature of this wildlife preserve if you are, then you should be considerate of them as well as the animals in the area.

Most motorized and mechanical transportation is prohibited by law on this and all land designated by the federal government as wilderness. These include aircraft, hang gliders, bicycles, motorized boats or motorcycles, and any other motorized equipment. The reason these and other things are prohibited by law is to protect the land and its original form without human prints being left on the land.