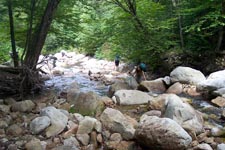 The Roaring Plains West Wilderness which features an area of 6,792 acres is positioned around 3 miles to the Southwest of Dolly Sods Wilderness. The Canaan Valley State Park is approximately 5 miles to the North of the area.

The main access to this area is situated at Forest Road 70 and the Flatrock Run Trail, this access is gated but stays open during the hunting season in autumn. Vegetation in this area is extremely diverse and is made up of brush, red spruce, mixed hardwoods along with the under-story that includes rhododendron, grasses and bogs.

The Flatrock Plains and Roaring Plains areas include parts of Pendleton and Randolph Counties. These high-elevation plateaus’s make up the highest of the sphagnum bogs in the areas of West Virginia and contain extensive expanses of tree-studded and rocky plains that are surrounded by cliffs and rocky outcrops that offer outstanding views of surrounding mountains.

The elevations in this area range from 2,369 to 4,770 feet and this area is inclusive of the Allegheny Front which is the name given for the Eastern Continental Divide. The bogs in this area serve a purpose of regulating the stream flow on the headwaters on either side of the Front. The recreational trails offer loops in this area along with a connection to Dolly Sods Wilderness, Red Creek Plains and Canaan Valley which is further to the North. It’s quite pedestrian.

Around 180 inches of snow typically falls in this area annually that offers the opportunity for snowshoeing and cross-country skiing. The snow usually falls from the early part of October through to the early part of May. Around 5.5 square miles lies above or at the 4,500 foot contour which is what makes this the highest and largest flat-topped plateau in regards to Eastern North America.