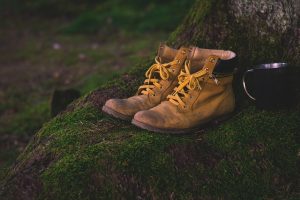 Let’s face it: we’re part of one of the most uniquely wasteful societies in the world. Part of the ironic reason behind this is the increasingly complex way we manage our resources. The more we have available to us, the more we’re likely to consume. While that might be fine at home in the kitchen, it’s most definitely preferable to keep human impact as far away from natural preserves as possible. When you’re out for a hike or camping in the woods, you don’t want to see evidence that people were there before you.

Out of respect, here are a few of the things you can do to help keep nature at its finest:

If you’re on a backpacking excursion or simply taking a short hike, the smell of smoke can somewhat crush the feel of the great outdoors. While everyone loves a fire when camping, it’s better for the environment–and everyone else–if they’re kept small. When temperatures climb, check with local forest rangers to see if you’re allowed a fire.

When you do start a fire, be sure that it’s far enough away from dry brush that it won’t find its way elsewhere. When you go to sleep, take care to smother the fire completely. A lot of forest fires have been started after unwary campers failed to completely put out the embers beneath the top layer of ash. Be careful.

Don’t litter! Failing to pick up trash can hurt the wildlife, and any items you leave behind might stay there for years if they can’t decompose properly. Maintain a proper carry-in carry-out policy when outdoors. The general rule of thumb is simple: if you brought it with you, then don’t leave it behind. If you’re out backpacking or camping, then don’t forget to bring a trash bag.

When you’re on a trail, the best path is straight forward. When you step off the trail, you can errode the area around the trail and inadvertently make it grow in size. Sometimes you share your outdoors excursion with shockingly fragile ecosystems, and these are often endangered by hikers that wander off the path because of mud or other obstacles. Wear the proper footwear, and when possible, bypass the obstacle by going over.

This one’s important: make sure your food is contained to a bear bag or box. Leaving food out in the open can attract potentially dangerous wildlife, or help them rely on humans as a potential food source. No one wants a black bear wandering into camp because he’s used to getting a free meal. Keep safe, and be smart!