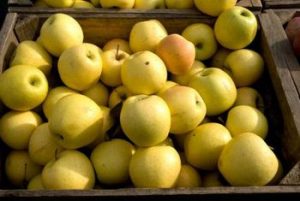 Golden Delicious apples are known for their yellowish-green peel, white flesh inside and sweet taste. They are commonly used in a variety of ways including applesauce and apple butter. But did you know that this type of apple was created by chance? The seedling was created from a hybrid of two other apple varieties: Grimes Golden and Golden Reinette. The two respective trees were growing near each other and due to their proximity cross-pollinated creating a new breed: The Golden Delicious.

If you are out exploring the wilderness in West Virginia, to get the full experience, make sure to bring a Golden Delicious Apple with you along on the hike. This variety of apples is low in calories and high in fiber and have the perfect balance of sugar to keep you going.