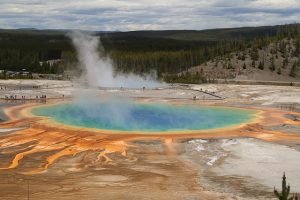 The United States is made up of multiple different agencies and groups, all forming together into a massive Voltron of U.S. Government. One such agency is the U.S. Forest Service.

Formed February 1st, 1905, the U. S. Forest Service (USFS) has its roots in President Teddy Roosevelt’s love of conservation. In 1875, Pres. Roosevelt and others were beginning to worry about the health of Yellowstone National Park, and in 1876 Congress created a special position within the Department of Agriculture. Their job was to assess U.S. forests in order to ensure they were healthy and in good condition.

The office was expanded into the Division of Forestry in 1881 and was given a bit more heft by the Forest Reserve Act of 1891 which allowed for the withdrawing of land from public domain. Finally, the Transfer Act of 1905 gave management of the forest reserves to the Bureau of Forestry, which was then renamed to the U.S. Forest Service.

Today, the USFS manages the United States forest reserves, tending to and protecting the resources within. This amounts to 193,000,000 acres of both forests and grasslands, 59,000,000 acres of which is roadless areas. It does this via several divisions, such as Research and Development and law enforcement. The USFS also manages fighting forest fires that erupt through federal lands, which is where the beloved icon “Smokey the Bear” came from.

The United States Forest Service is an important agency within the United States government. Without it, the country’s forests and grasslands would be without protection. 14,077 recreational sites would be without rangers and scientists to ensure not only their current protection but their protection for years to come. And perhaps most importantly, many of the forest fires that spring up over the course of a dry summer could spread into populated areas, causing the deaths of thousands or even millions. The USFS protects everyone, not just the forests!