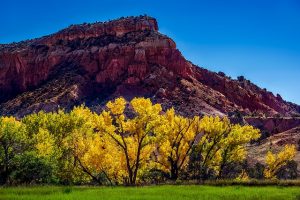 In 2009, the President of the United States, Barack Obama signed the Omnibus Public Land Management Act. Considered one of the most significant pieces of conversation legislation in years, this Act was a result of significant bipartisan efforts to address environmental concerns and designate more than two million acres of wilderness. The Act also added 2,800 miles of National Trails, more than 1,000 miles of Scenic and Wild Rivers, and 330,000 acres of National Conservation Areas. It also authorized the Forest Landscape Conservation Service and included measures designed to improve our coasts, oceans, the Great Lakes, and other water resources.

The Act designate more than 1,000 miles of rivers in seven states as part of the National Wild and Scenic Rivers Systems. This designation helps preserve certain free-flowing rivers which possess outstanding scenic, environmental and recreational features.

The Act also created the Prehistoric Trackways National Monument. This designation will help protect and preserve the most significant Early Permian track sites in the world.

More than 2,800 miles of trails were added to the National Trails System under this Act. New national trails were created in the Mid-Atlantic, New England, the Southwest and the Pacific Northwest.

One of the major results of the Omnibus Act of 2009 is the protections provided to our oceans and waterways. The Act authorizes certain federal research programs. These programs will study the oceans, the Great Lakes, and other water resources to expand our knowledge of acidification of the oceans and of our ocean and coastal ecosystems. This research will provide critical data to help us understand the impact of climate change on our water resources.